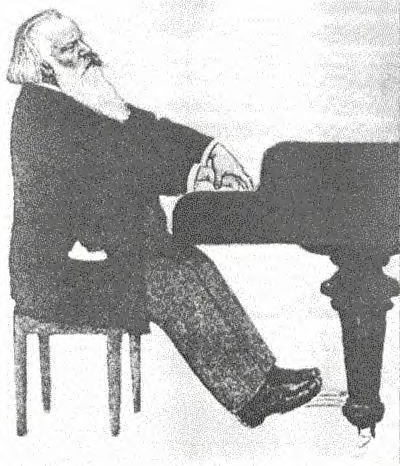 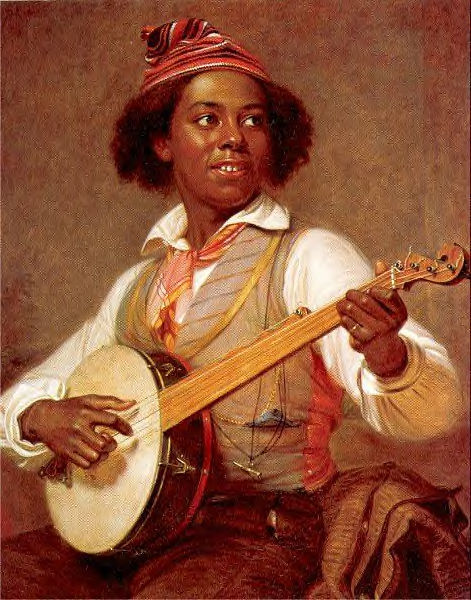 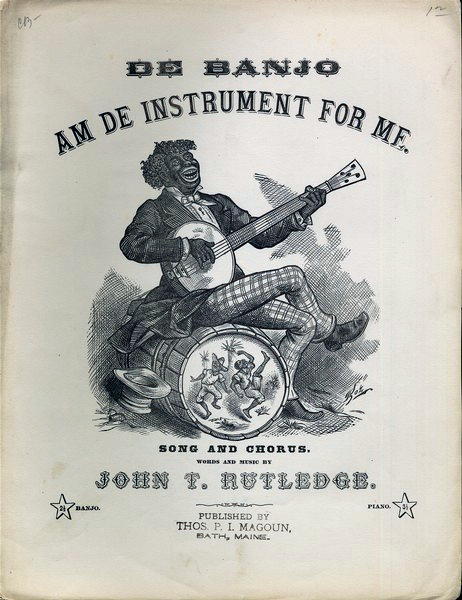 As pictured in this sheet from 1877, the banjo quickly made its appearance on the covers of sheet music, enforcing its common association with African Americans. 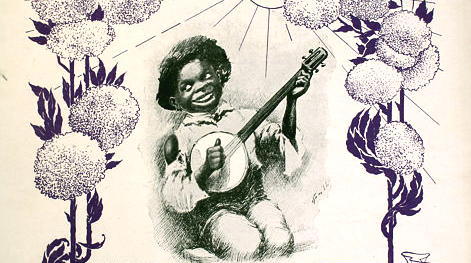 That association did not deter members of other social groups from practicing the art. The Banjo Lesson (1893) by Mary Cassatt. 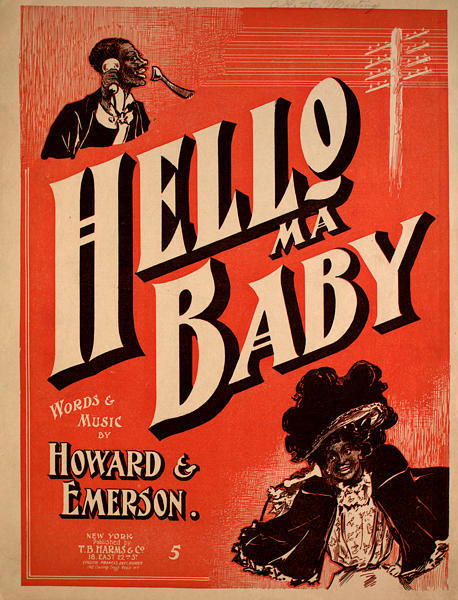 One of the great ragtime songs of the era, published 1899. It was quoted by several concert composers of the period, including Charles Ives and Percy Grainger. 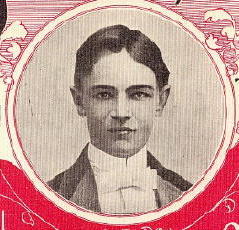 Ben Harney, another ragtime pioneer, was billed in 1896 as "the rag time pianist". He gained fame from his stage performances and his ragtime songs.

Did Johannes Brahms Contemplate A Ragtime Project?
Though many in concert music circles disparaged ragtime, others, not burdened by cultural straitjackets of what constitutes “proper” music, listened with interest. Among these are Claude Debussy, Percy Grainger, and Charles Ives. Claims have been made that a composer of an even earlier generation had expressed interest in using ragtime. This was Johannes Brahms (1833-1897). Rudi Blesh wrote in his Introduction to the Collected Works of Scott Joplin: “Brahms had envisioned a ragtime project just before his death”. With Blesh as the authority, others have repeated the story. Jim Dapogny, the scholar and pianist who compiled the Smithsonian’s Jelly Roll Morton edition, was even inspired to compose a rag in tribute to Brahms: Rag (In Memoriam Johannes Brahms) (1989).

The story of Brahms’ attraction to ragtime is believable to the extent that his works display a lively interest in folk music and in unusual rhythms.

But Brahms died April 3, 1897. Though ragtime existed as both a term and a musical style by that time, it was still unfamiliar to most Americans. Could Brahms, living in Germany, have known “ragtime” at such an early date? What is the evidence?

Mr. Arthur M. Abell, an American violinist, was one of the few who could make the Master talk intimately about his own work. “A year before Brahms died,” said Mr. Abell, “he asked me whether I played the banjo. ‘No,’ I replied. ‘Why?’ ‘Because at Klengel’s [Julius Klengel, a cellist] I met an American girl who played for me, on that curious instrument, a sort of music which she called Ragtime. Do you know this?’—And he hummed the well known tune which goes to the words:
If you refuse me,
Honey, you lose me.
‘Well,’ the Master continued, with a far-away look in his eyes, ‘I thought I would use, not the stupid tunes, but the interesting rhythms of this Ragtime. But I do not know whether I shall ever get around to it.’”

Is this believable evidence? The story only increases my doubts. Here are issues to consider:

In reading through other Brahms biographies, I found several authors accepting Schauffler’s seriously compromised story; other biographers ignore it. But a biography earlier than Schauffler’s tells the story of the American girl playing banjo for Brahms. This is Max Kalbeck’s eight-volume work written between 1904-1914 (never translated to English). It relates an incident involving a young American woman who was a cello student of Klengel’s. This American also played banjo and, at Klengel’s request, demonstrated it to Brahms. Klengel had told Kalbeck the story, placing the incident in January 1895. Here is what Kalbeck wrote:

[Brahms was a dinner guest at Klengel’s home, and the cello student Mary X was also present.] After dinner . . . Klengel directed his student to fetch her banjo, an instrument Brahms had never heard of. Of African origins, it was introduced to America by the Negroes. . . . The Negro accompanies his songs and dances with banjo, and Miss Mary found the opportunity to learn the skill from the source. Brahms was astonished to find the primitive instrument so versatile and expressive. He examined it carefully, . . . and remarked in the course of conversation that he now understood where friend Dvorak had gotten the melodies of his American compositions.
[I am indebted to Styra Avins for sending me this passage and for her valuable discussions on Brahms. Dr. Avins is a renowned authority on Brahms and co-editor/translator of Johannes Brahms: Life and Letters (Oxford, 1998).]

This account is believable and, as we would expect, it lacks any mention of ragtime. Brahms heard an American play the banjo and was impressed with the instrument’s expressiveness. We have no way of knowing whether the performance featured the syncopation later associated with ragtime, but it is unlikely that the term “ragtime” would have been used in 1895.

Though we cannot disprove that Brahms had used the term “ragtime” in talking to Abell in 1896, the year makes that usage unlikely, and the citation of a song that was not yet published demonstrates that the transmitters of the story, either Schauffler or Abell, had little concern for historical accuracy. That the story has become so widespread demonstrates the ease with which sloppy scholarship can be accepted. Viewing the evidence critically, we should reject the story that Brahms had thoughts of using ragtime.

--------------------
An email from violinist Daniel Stepner on 12/28/2004 adds additional reason to question the accuracy of Abell's essays. Stepner relates that around 1968, when he was working with pianist/scholar John Kirkpatrick, Kirkpatrick became interested in Abell’s book and contacted Abell’s relatives. He learned that the manuscripts from the interviews with Brahms and others were left in Europe and lost during World War I. For his book, Abell reconstructed the interviews from memory.
--------------------

I first presented this material on Brahms and ragtime at the symposium of the Scott Joplin Festival in June 2002.

"Stack-a-Lee" and Early Ragtime
The Leavenworth Herald, a black newspaper in Kansas, has this small item in an issue from mid-1897:

It is understood that Prof. Charlie Lee, the piano thumper, will play 'Stack-a-Lee' in variations at the K. C. Negro Press association. Scarcely any convention held in K. C. is complete unless Prof. Lee is down on the program. The professor is an idol on such a high pedestal in Kansas City that men, women and children fall on their knees in worship of him.
Leavenworth Herald, August 21, 1897, [p. 2].

Though the writer of the item disapproved of Charlie Lee, many others in Kansas City clearly held him in high regard: “Scarcely any convention held in K. C. is complete unless Prof. Lee is down on the program.”
From earlier issues of the same paper, we know that Charlie Lee was a ragtime pianist who did not read music:

Interstate Literary Notes. . . .. Missouri and Wyandotte [the county that contains Kansas City, Kansas] people have the temerity to place Charles Lee’s piano playing on an equality with that of Mrs. Lulu Cunningham of this city, in the view of the fact that Lee plays nothing but rags, 'by ear!' It is said that Lee cannot distinguish the difference between a note and a Chinaman’s wash ticket. . . . He plays rags with so many variations that the people’s enthusiasm leads them to the belief that he is playing a 'sonata,' or a 'symphony,' or something or other. Mrs. Cunningham is truly a first-class musician; in comparison, Lee pales into insignificance.
Leavenworth Herald, January 16, 1897, [2].

Again, the writer’s disparaging comments unintentionally reveal facts of considerable interest. As a non-reading ragtime pianist who played variations, it would seem that Lee was an improvising musician. (Have you ever read that ragtime was not improvised?)

The music on which he was improvising, “Stack-a-Lee,” also provokes considerable interest and speculation. “Stack-a-Lee” songs (also known under such variations as “Stagger Lee,” “Stagolee,” and the like), relating the tale of the gambling man who lost his Stetson hat to Billy Lyons [aka DeLyon, de Lyon, O'Lyons, etc.] and consequently shot him, have spanned the generations. The site Stagger Lee Songs lists 200 recorded versions from the early 1920s to July 2002, embracing almost every type of popular, jazz, and folk style. That Charlie Lee used it for variations in 1897 indicates it was already a known song by that year.

Listening to a few of the recorded versions immediately reveals that there is more than one musical piece that goes under the name “Stack-a-Lee” (or its variants). We might like to think that Charlie Lee’s version had the same source as, say, Ma Rainey’s “Stack O'Lee Blues” (recorded in 1925), but we have no evidence to support that conclusion.

Many theories have been proposed to explain the story’s origins, but the evidence overwhelmingly points to a shooting in St. Louis on Christmas night, 1895, between “Stag” Lee Shelton and William Lyons. This incident, along with an aftermath that continued for almost two decades, was reported in the St. Louis Globe-Democrat and other papers. (See the extensive examination by George M. Eberhart: "Stack Lee: The Man, the Music, and the Myth", Popular Music and Society (Spring 1996), pages 1-70.) Shelton was apparently not the prototypical arch villain as portrayed in the vast majority of the Stack-a-Lee songs, for the sentencing judge, some members of the jury, and many state politicians appealed to the governor for commutation of his sentence (set at 25 years). That he was vilified in song might have been the work of Lyons’ relatives, who opposed his release. The result, however it came about, was that Stack-a-Lee joined the ballad tradition memorializing outlaws.

As so often occurs in research, discoveries that answer old questions produce a new round of inquiries. Thus, we have new questions about both Stack-a-Lee and about the pianist Charlie Lee.

The account of the ragtime pianist Charlie Lee playing “Stack-a-Lee” variations in 1897 presents puzzles that we may never solve. But it also presents opportunities for new insights into the music and society of the early ragtime years. The process of looking for answers may, itself, bring unsuspected breakthroughs and realizations. That’s the nature of research.

---------------------
I first presented the material on Charlie Lee at the symposium of the Scott Joplin Festival (Sedalia, MO) in June 2001. The posting on this website prompted discussion on the newsgroup rec.music.ragtime (“Stack O'Lee and 12-bar folk songs before the blues”) that led us to a greater exploration and understanding of the Stack-a-Lee story.